A treasure trove of classic BMWs and other models was discovered in the workshop of an abandoned dealership in Tarragona, Spain. The concessionaire served the region until closing operations around 2010.

The M539 Restorations YouTube channel team visited the dealership and filmed over an hour of footage.

Most vehicles are so covered in dust that the color is not easily known without looking at the VIN label. For example, the beautiful dark green color combination of a BMW 318i E30 that has been idle since 2008 was indiscernible without cleaning up many years of accumulated grime. Alongside the 318i, an E30 325i Cabriolet that has racked up just 25,929 km since leaving the factory. There is also a BMW 850i E31 with a V12 engine.

The crown jewel of the collection is a BMW M5 E28, hidden behind boxes of Vespa parts. As the grandfather of all super sedans, the M5 launched a fast four-door craze that we still see on the market today, and it was the world's fastest production sedan when it launched thanks to its 286 horsepower, 3.5 liters. in line.

This particular example suffered severe collision damage to the left side which gave way to the B-pillar and both doors, which would make this a difficult repair for anyone to carry out. Only 2,241 E28 M5s were produced, so even with the damage this could still be a worthwhile project for a true enthusiast.

The M5's fate is echoed in many of the vehicles in the collection, including an E30 M3, whose engine was replaced, but the owner passed away before the owner could pick it up.

Germany wasn't the only country represented in the collection either, right in front of the dusty 318i were two Italian stallions, a Lancia Gamma and an Alfa Romeo GTV6. There were also several motorcycles, a Seat 131, an NSU Rotary, a Citroën Mehari and even a Jeep Cherokee.

The vehicles, as well as collections of various parts and pieces, will go on sale soon. For more information about the sale, the seller offered his contact information as @eurobimmerstock on Instagram and euro@bimmerstock.eu as his email address. 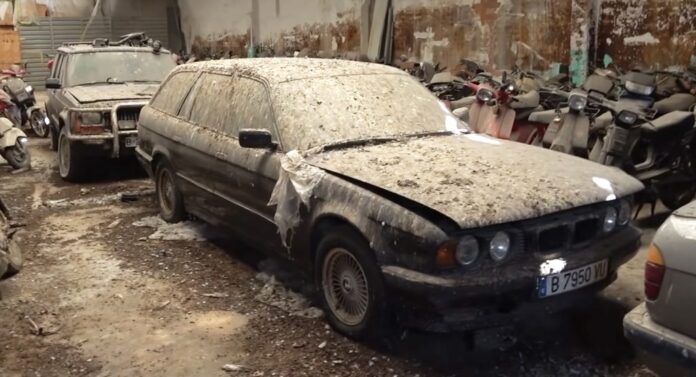