Between 1960 and 1961, Ford produced a version called the Ford Galaxie Starliner. These ultra-sleek coupes embody Jet Age design with a pillarless bubble hardtop and star emblems along the roofline.

Youtuber and classic car enthusiast Ryan Brutt posted on his Auto Archaelogoy channel the story of a 1960 Ford Starliner stored in the garage that has been in the same family since new.

What makes this 1960 Starliner special is its family history and the rare 352cid Hi-Pro V8 under the hood.

In the video, Brutt tells the story of the car with the original owner's son, who tells him that his father bought the car new in 1960:

“My father drove from 60 to 70 and then the car was parked and put away”, says the son. He also remembers riding in the car with his brothers and says that his mother and father were married in the vehicle.

After his father passed away in 1995, the son moved the car from the family garage to his home, where it was stored for another 25 years.

“In 50 years, the car was pushed down the street about a block and then towed for about three kilometers,” he adds.

Until the last moment, the son's mother told him never to part with the car and he is fulfilling his promise when he is about to fix the car and get it running again.

Underneath the layers of dust, the bodywork is finished in Raven Black and is equipped with tinted windows, chrome skirts, twin baby spotlights and blue initial badges on the roofline. 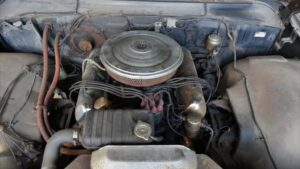 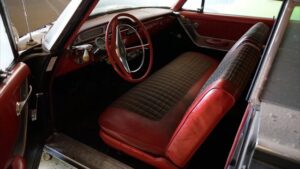 In the video, Brutt points out a hole in the bumper that comes with a backstory:

“My father always said he was competing with a guy side by side and the guy's engine came loose and part hit the fender”, says the son.