There is a whole ocean of information to be absorbed. Unfortunately, unless you're something of a spongebob (with or without square pants) when it comes to memory banks, many details will escape your grasp unless you dedicate yourself to them completely. Still, even non-fans know a little about the Impala SS's magic words. Or the fact that it had big (big) production runs, from 1961 to 1969 and 1994 to 1996, among others.

So there's an original Impala SS, a modern renaissance, and a whole world of Impala enthusiasts who would give anything just to try again. Well, just in this case, they just need a voluntary suspension of disbelief to allow the dream of another modern renaissance for the Impala SS to wear off. There, the full-size Chevy takes the Cadillac CT6 and reworks it with Camaro bits and pieces, hopefully of the ZL1 variety.

We don't know for sure, as Jim, the virtual artist best known as jlord8 on social media, which continues its return to passenger cars after a long two-door sports and off-road pickup series, remained mute about the sixth generation 'Maro Matters and only mentions Chevrolet Performance in the description hashtags. Sadly, following that incredibly well-received series of pickup trucks, it escaped into the world of passenger cars with a Chevy Malibu ZL1 makeover.

That one had street racer vibes throughout, as well as a Cadillac CT5-V Blackwing secret, but the author still didn't deem it worthy of the Super Sport moniker. In return, the new " may be worthy of the name Impala SS ”, so we can only imagine that Chevy would ditch the CT6-V's 550bhp twin-turbo Blackwing V8 in favor of something snappy from its parts box - perhaps the 650bhp, 6.2-liter supercharged LT4 V8. power of the Camaro ZL1? 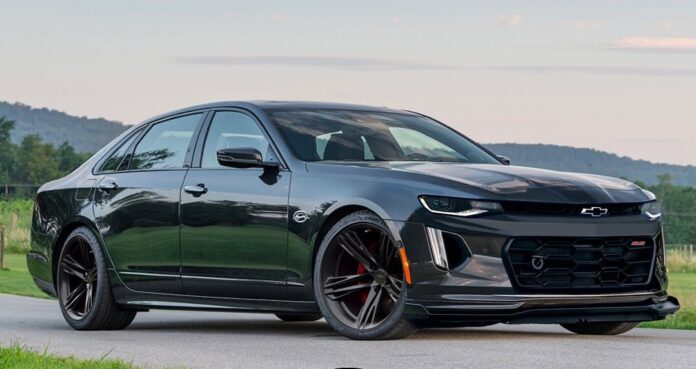